I want to stray away from OSI-Systems to "new" ideas. These are some features I would love to add to the shard. Everything is open for change and discussion on the discord server. ;)

Yepp. You read that correctly.
Animals and training fights have a low(!) chance of lethally wounding you. But players are able to end your characters life - considering they used sufficient roleplay and preparations. Having a staff member overlook this will elp your point. If you feel your murder was not roleplayed out enough, you can create a forum post to have it reviewed.
If you are mortally wounded and left in a ditch, somebody who finds you might be able to rescue you. No guarantees, it's a harsh world.

This is just a mere Idea.
Characters will age 1 iG-Year each RL-month (30 days)
The older a character becomes, the higher the chance to die. Maybe some skill-/stat-deterioration. Livespan would be 3-5 RL years.
This should make players value their items/wealth less and teach them not to be upset by the permadeath. It will also bring the possibility to avoid every house being "reserved" by inactive characters. Houses of deceased characters can be raided/taken over by other players.
An additional possibility is to be able to pass on posessions to a new family member character. "Heritage", so to speak.

A new level system that rewards players for activity and roleplay.

Additional to the level system, there will be a skill tree, so the few classes available have to choose which specialization they want.

Food will deteriorate.
Clothes might deteriorate through fighting, work and changing.
Reason: Usually, Chars buy their food in large bulk once and are fed for the next hundred years. Farmers and Hunters will not have customers anymore when everyone has a basement filled with apples and bread.

You don't hunt monsters, since there are no mythical creatures.
Every animal (including humans?) you kill have their own type of pelt/leather which you can get by skinning them with a proper "knoif". Pelts can be cured to leather. Leather maybe may be able to be dyed.

Animals can be hunted. When killed with Arrows, with every hit they lose 2.5% to 5% of their Pelt yield on skinning. Pointy weapons (f.e. Spears) will lower the yield by 5-10% each hit. Hits with a sword or an axe will result in a loss of 10-40% each hit. The remaining yield will be rounded up.
For example: A stag is killed with 7 arrows. Would give 10 pelts, will now give only 65%, which would be 6.5 pelts. Rounded up: 7 pelts.

Ressources will be finite. Players are able to clear a forest - but if all trees are gone, no new trees will grow.
If all animals are killed, no new animals will be born.
This might not be taken to the mines.

Trees can be worked at with a knife/dagger to cut off branches for fire.
Using an Axe will timber the tree - and the stem can be sawn into thick planks, which will be sawable into poles or thin planks.
Trees can spread their seeds/saplings. Players can use branches to create saplings and plant them.

On special parts of the map (mines/caves, mountains) spawn (depending on region?) several different nodes. These nodes have the colour of the ore inside. (Ask “Keith” in ServUO-dscrd. He created a script _like_ that.)
The better the pickaxe, the better its durability and yield. 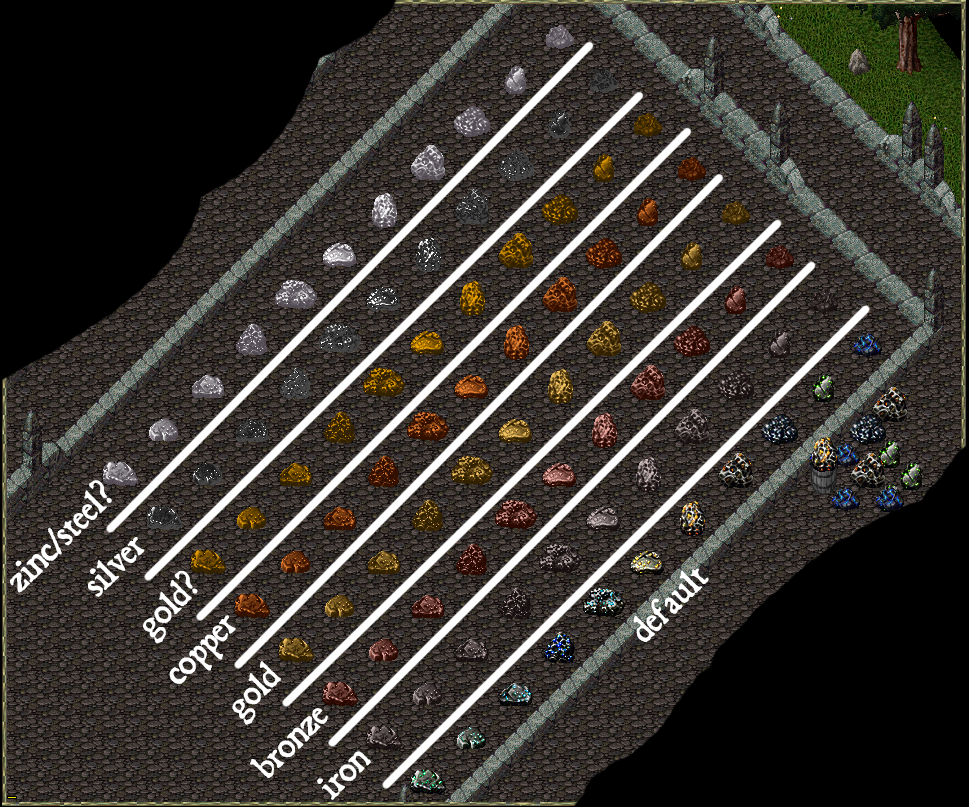 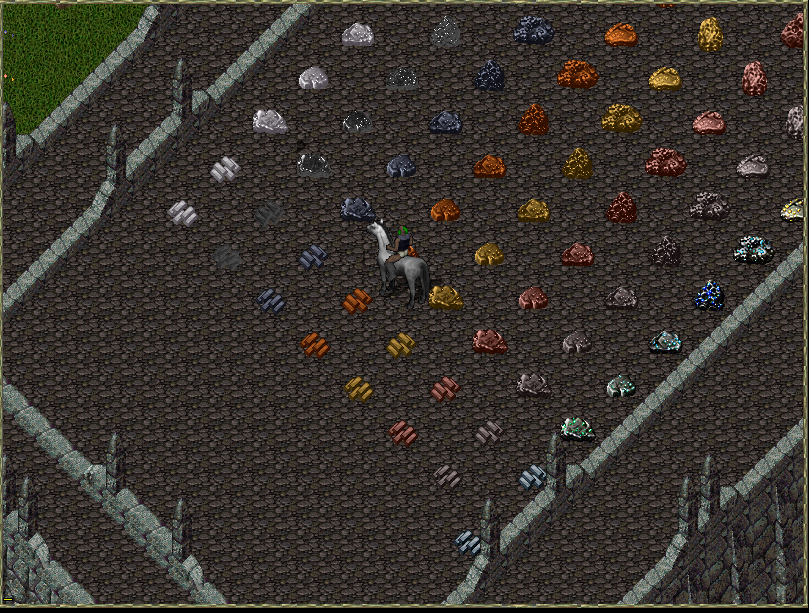